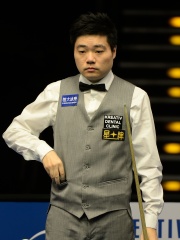 Ding Junhui (Chinese: 丁俊晖; born 1 April 1987) is a Chinese professional snooker player who has been considered the most successful Asian player in the history of the sport. Throughout his career, he has won 14 major ranking titles, including three UK Championships in 2005, 2009, and 2019; two Shanghai Masters titles in 2013 and 2016; and one German Masters title in 2014. He has also twice reached the final of the Masters, winning once in 2011. Read more on Wikipedia

Since 2007, the English Wikipedia page of Ding Junhui has received more than 1,061,493 page views. His biography is available in 28 different languages on Wikipedia making him the 19th most popular snooker.

Most Popular Snookers in Wikipedia

Among SNOOKERS In China

Among snookers born in China, Ding Junhui ranks 1. After him are Liang Wenbo (1987).