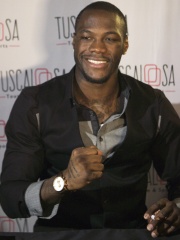 Deontay Leshun Wilder (; born October 22, 1985) is an American professional boxer. He held the WBC heavyweight title from 2015 to 2020, making 10 successful defenses. By winning the title, Wilder became the first American world heavyweight champion since 2007, which was the longest period of time in boxing history without an American heavyweight champion. Read more on Wikipedia

HYPEBEAST
Tyson Fury Says There Is "No Such Thing" as the Drake Curse After Defeating Deontay Wilder
After an 11th round KO win against Deontay Wilder, Tyson Fury is making sure that the Drake curse has been lifted.Going into the trilogy fight, Fury was the favorite to win having also won by TKO in the seventh round against Wilder in February 2020. Prior to …
[email protected] (HYPEBEAST), HYPEBEAST
Forbes
Is Tyson Fury Worthy Of GOAT Status After His Destruction Of Deontay Wilder?
Almost immediately after Fury capped an epic heavyweight trilogy with a brutal 11th round knockout of Wilder, the GOAT talk started.
Anthony Stitt, Contributor, Anthony Stitt, Contributor https://www.forbes.com/sites/anthonystitt/
ABC News (AU)
Tyson Fury hits out at 'sore loser' Deontay Wilder
British boxer Tyson Fury accuses his American opponent, Deontay Wilder, of being a sore loser after refusing to acknowledge him at the conclusion of their epic heavyweight trilogy contest.
Simon Smale
The Daily Caller
Deontay Wilder Receives Six-Month Medical Suspension
Deontay Wilder has been suspended for six months after his loss to Tyson Fury. He received a six-month medical suspension.
David Hookstead