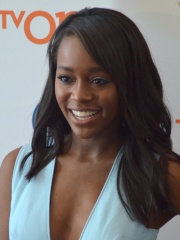 Aja Naomi King (born January 11, 1985) is an American actress best known for her role as Michaela Pratt in How to Get Away with Murder. She began her career in guest-starring roles on television, and starred as Cassandra Kopelson in The CW medical comedy-drama Emily Owens, M.D. In 2014, King began starring as Michaela Pratt in the ABC legal drama series How to Get Away with Murder, for which she received an NAACP Image Award for Outstanding Supporting Actress in a Drama Series nomination in 2015. She also has starred in the films Four (2012) and Reversion (2015). Read more on Wikipedia