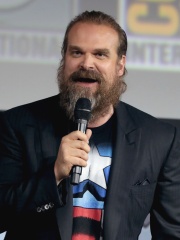 David Kenneth Harbour (born April 10, 1975) is an American actor. He gained recognition for his portrayal of Jim Hopper in the Netflix science fiction drama series Stranger Things (2016–present), for which he earned a Critics' Choice Television Award in 2018. For the role, he also received Primetime Emmy Award and Golden Globe Award nominations.Harbour had supporting roles in films such as Brokeback Mountain (2005), Quantum of Solace (2008), The Green Hornet (2011), End of Watch (2012), The Equalizer (2014), Black Mass (2015), and Suicide Squad (2016). Read more on Wikipedia

Since 2007, the English Wikipedia page of David Harbour has received more than 9,405,278 page views. His biography is available in 31 different languages on Wikipedia making him the 2,151st most popular actor.