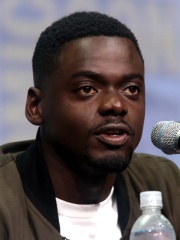 Daniel Kaluuya (born 24 February 1989) is a British actor and writer. Kaluuya began his career as a teenager in improvisational theatre. He subsequently appeared in the first two seasons of the British television series Skins, in which he co-wrote some of the episodes. Read more on Wikipedia

Since 2007, the English Wikipedia page of Daniel Kaluuya has received more than 7,822,725 page views. His biography is available in 35 different languages on Wikipedia making him the 6,164th most popular actor.