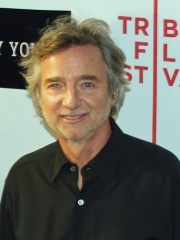 Curtis Lee Hanson (March 24, 1945 – September 20, 2016) was an American film director, screenwriter, and producer. His directing work included the psychological thriller The Hand That Rocks the Cradle (1992), the neo-noir crime film L.A. Confidential (1997), the comedy Wonder Boys (2000), the hip-hop biopic 8 Mile (2002), the romantic comedy-drama In Her Shoes (2005), and the made-for-television docudrama Too Big to Fail (2011). For his work of L.A. Confidential, Hanson won the Academy Award for Best Adapted Screenplay in 1998, for co-writing with Brian Helgeland, alongside with additional nominations for Best Picture, Best Director, and for winning the Palme d'Or at the 1997 Cannes Film Festival, and became one of the five directors (alongside Quentin Tarantino, Steven Soderbergh, David Fincher, and Barry Jenkins) to ever sweep "The Big Four" critics awards (LAFCA, NBR, NYFCC, NSFC). Read more on Wikipedia