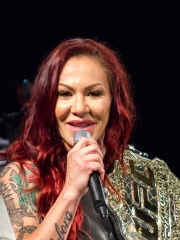 Cristiane Justino Venâncio (born July 9, 1985), known professionally by her ring name Cris Cyborg (and formerly by her married name Cristiane Santos), is a Brazilian–American mixed martial artist who as of January 2021 competes in Bellator MMA, where she is the Bellator Women's Featherweight World Champion, having held the title since January 2020. She is also a former UFC, Strikeforce and Invicta FC World Featherweight Champion. She is the only MMA fighter in history, male or female, to become a Grand Slam Champion, holding world championships across four major mixed martial arts promotions. Read more on Wikipedia

Among MARTIAL ARTS In Brazil