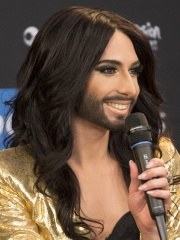 Thomas Neuwirth (born 6 November 1988) is an Austrian singer, recording artist, and drag queen who is known for his stage persona Conchita Wurst (also known mononymously as Conchita). Conchita came to international attention after winning the Eurovision Song Contest 2014 as Austria's entrant with the song "Rise Like a Phoenix". Neuwirth uses masculine pronouns when referring to himself but feminine pronouns to describe Conchita.Born in Gmunden, Austria, Neuwirth moved to Graz to do his matura exam with a focus on fashion, before embarking on a singing career through the 2007 casting show Starmania. Read more on Wikipedia

Since 2007, the English Wikipedia page of Conchita Wurst has received more than 2,082,143 page views. His biography is available in 74 different languages on Wikipedia making him the 316th most popular singer.