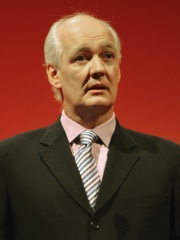 Colin Andrew Mochrie (; born November 30, 1957) is a Scottish-born Canadian actor, writer, producer and improvisational comedian, best known for his appearances on the British and US versions of the improvisational TV show Whose Line Is It Anyway? Mochrie honed his comedic talents with Vancouver's TheatreSports League and Toronto's Second City theatre. He has appeared in dozens of television series and films, as well as theatrical shows. Read more on Wikipedia

Since 2007, the English Wikipedia page of Colin Mochrie has received more than 1,851,199 page views. His biography is available in 15 different languages on Wikipedia making him the 8,117th most popular actor.

Among people born in 1957, Colin Mochrie ranks 475. Before him are Phil Murphy, Alan Curbishley, Keith Connor, Steve Foster, Mark Lawrenson, and Terry McAuliffe. After him are Cindy Sheehan, Jim Dauterive, and Mark Acheson.