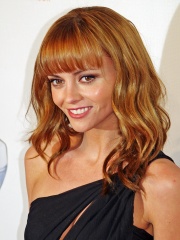 Christina Ricci ( REE-chee; born February 12, 1980) is an American actress. Known for playing unusual characters with a dark edge, Ricci predominantly works in independent productions, but has also appeared in numerous box office hits: to date, her films have grossed in excess of US$1.4 billion. Read more on Wikipedia

TVLine
Wednesday Bosses on Landing Christina Ricci for Netflix Series: 'We Weren't Sure We Could Make It Happen'
With Wednesday, which debuts this Wednesday on Netflix, creators Al Gough and Miles Millar (Smallville) bring their unique take on the beloved Gothic character. The story follows the homicidal teen while enrolled at the peculiar Nevermore Academy, where she a…
Keisha Hatchett
Newsweek
Who Does Christina Ricci Play in Netflix's 'Wednesday'?
Christina Ricci's turns as Wednesday Addams in the '90s "Addams Family" films are iconic, and now she's back for more in Netflix's new show "Wednesday."
Roxy Simons
Celebitchy.com
Christina Ricci sold her purse & Chanel jewelry collections to pay for her divorce
Christina Ricci is enjoying something of a professional and personal renaissance these days. She’s booked and busy, with roles on Yellowjackets, Netflix’s Wednesday Adams show, and a series about Zelda Fitzgerald. She survived her marriage to and divorce from…
Kaiser
Biztoc.com
Who does Christina Ricci play in Netflix's "Wednesday"?
There are few actors who have become synonymous with the characters they portray onscreen. Christopher Reeve will forever be Superman, Kevin Conroy will continue to be regarded as the voice of Batman, and Christina Ricci will always be known as Wednesday Adda…
newsweek.com