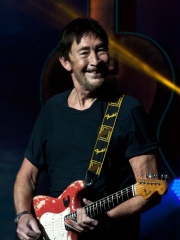 Christopher Anton Rea ( REE-ə; born 4 March 1951) is an English rock and blues singer-songwriter and guitarist. Born and raised in Middlesbrough, he is of Italian and Irish descent. He is known for his distinctive, husky-gravel voice and slide guitar playing, and the Guinness Rockopedia described him as a "gravel-voiced guitar stalwart".British Hit Singles & Albums stated that Rea was "one of the most popular UK singer-songwriters of the late 1980s" and "already a major European star by the time he finally cracked the UK Top 10 with the release of the single "The Road to Hell (Part 2)", which was his 18th chart entry. Read more on Wikipedia

Since 2007, the English Wikipedia page of Chris Rea has received more than 2,200,269 page views. His biography is available in 34 different languages on Wikipedia making him the 167th most popular singer.