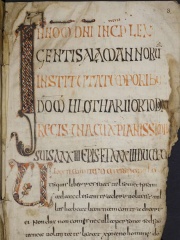 Chlothar IV (died 718) was the king of Austrasia from 717 until his death. He was a member of the Merovingian dynasty, and was installed by Charles Martel, a contender for the office of mayor of the palace, in opposition to Chilperic II, whose rule was thereby restricted to Neustria. This marked the first time since 679 that the kingdom of the Franks was divided. Read more on Wikipedia

Chlothar IV is most famous for his victory over the Visigoths in 507.

Among politicians, Chlothar IV ranks 3,708 out of 15,710. Before him are Emperor Yingzong of Song, Cleisthenes of Sicyon, Yelü Dashi, Jan Smuts, Ottavio Farnese, Duke of Parma, and Charlotte of Mecklenburg-Strelitz. After him are Nicholas Francis, Duke of Lorraine, Senakhtenre Ahmose, David I of Scotland, Ingvar Carlsson, Peter I, Duke of Bourbon, and Princess Ragnhild, Mrs. Lorentzen.