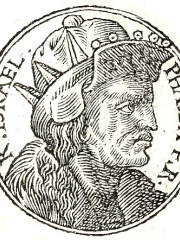 Pekahiah (; Hebrew: פְּקַחְיָה Pəqaḥyā; "YHWH has opened the eyes"; Latin: Phaceia) was the seventeenth and antepenultimate king of Israel and the son of Menahem, whom he succeeded, and the second and last king of Israel from the House of Gadi. He ruled from the capital of Samaria. Pekahiah became king in the fiftieth year of the reign of Uzziah, king of Judah. William F. Albright has dated his reign to 738–736 BCE, while E. R. Read more on Wikipedia

Pekahiah is most famous for his betrayal of the northern kingdom of Israel to the Assyrians.

Page views of Pekahiahs by language

Among politicians, Pekahiah ranks 3,652 out of 15,577. Before him are Godigisel, Sultan Husayn, Lee Hsien Loong, Shirkuh, Childebert the Adopted, and Mihailo Obrenović. After him are Al-Hakam I, Jani Beg, Chlothar IV, Vladimir Voronin, Bachir Gemayel, and Muyeol of Silla.

Others Deceased in 760 BC

Among politicians born in Palestine, Pekahiah ranks 3. Before him are Zacchaeus (50) and Herod Archelaus (-23).