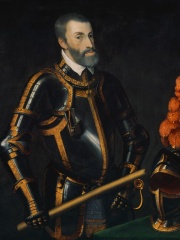 Charles V (24 February 1500 – 21 September 1558) was Holy Roman Emperor and Archduke of Austria from 1519 to 1556, King of Spain (Castile and Aragon) from 1516 to 1556, and Lord of the Netherlands as titular Duke of Burgundy from 1506 to 1555. As he was head of the rising House of Habsburg during the first half of the 16th century, his dominions in Europe included the Holy Roman Empire, extending from Germany to northern Italy with direct rule over the Austrian hereditary lands and the Burgundian Low Countries, and the Kingdom of Spain with its southern Italian possessions of Naples, Sicily, and Sardinia. Furthermore, he oversaw both the continuation of the long-lasting Spanish colonization of the Americas and the short-lived German colonization of the Americas. Read more on Wikipedia

Charles V, Holy Roman Emperor, is most famous for being the ruler of the Holy Roman Empire and for his role in the Protestant Reformation.

Among politicians, Charles V, Holy Roman Emperor ranks 36 out of 15,577. Before him are Queen Victoria, Commodus, Osman I, Abraham Lincoln, Qin Shi Huang, and Louis XVI of France. After him are Justinian I, Richard III of England, Umar, Selim II, Franz Joseph I of Austria, and Akhenaten.