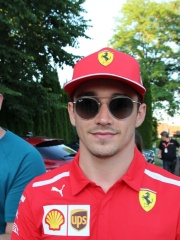 Charles Marc Hervé Perceval Leclerc (French pronunciation: ​[ʃaʁl ləklɛʁ]; born 16 October 1997) is a Monégasque racing driver, currently racing in Formula One for Scuderia Ferrari. Leclerc won the GP3 Series championship in 2016 and the FIA Formula 2 Championship in 2017. Leclerc made his Formula One debut in 2018 for Sauber, a team affiliated with Ferrari, for which he was part of the Ferrari Driver Academy. Read more on Wikipedia

Among racing drivers, Charles Leclerc ranks 315 out of 888. Before him are Martin Brundle, Marco Simoncelli, Eugène Chaboud, Jonathan Williams, Mauro Baldi, and Takuma Sato. After him are Alexander Wurz, Joe Kelly, Reg Parnell, Michael May, Dave Charlton, and Antonio Creus.

Others born in Monaco

Among RACING DRIVERS In Monaco

Among racing drivers born in Monaco, Charles Leclerc ranks 2. Before him are Louis Chiron (1899). After him are Olivier Beretta (1969).