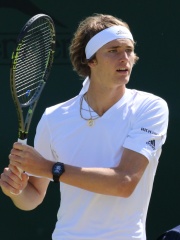 Alexander "Sascha" Zverev (German pronunciation: [alɛˈksandɐ ˈzaʃa ˈtsfɛʁɛf], born 20 April 1997) is a German professional tennis player. He is the second-youngest player ranked in the top 10 by the Association of Tennis Professionals (ATP), and was a permanent fixture in the top 5 throughout 2018. Zverev was the champion at the 2018 ATP Finals, which had made him the youngest winner at the year-end championship in a decade. Read more on Wikipedia

Since 2007, the English Wikipedia page of Alexander Zverev has received more than 2,093,769 page views. His biography is available in 33 different languages on Wikipedia making him the 236th most popular tennis player.