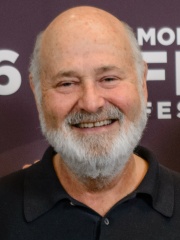 Robert Reiner (born March 6, 1947) is an American actor, comedian, and filmmaker. As an actor, Reiner first came to national prominence with the role of Michael Stivic on All in the Family (1971–1979), a role that earned him two Emmy Awards during the 1970s. As a director, Reiner was recognized by the Directors Guild of America Awards with nominations for the coming of age drama film Stand by Me (1986), the romantic comedy When Harry Met Sally... Read more on Wikipedia

Since 2007, the English Wikipedia page of Rob Reiner has received more than 6,099,414 page views. His biography is available in 40 different languages on Wikipedia making him the 1,464th most popular actor.