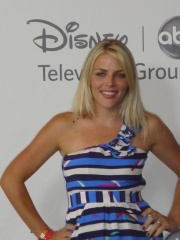 Elizabeth Jean "Busy" Philipps (born June 25, 1979) is an American actress and writer. She is best known for her roles on the television series Freaks and Geeks (1999–2000), Dawson's Creek (2001–03) and ER (2006–07), for her abortion access advocacy, and for her portrayal of Laurie Keller on the ABC series Cougar Town (2009–15), for which she received a Critics' Choice Television Award. Read more on Wikipedia

Since 2007, the English Wikipedia page of Busy Philipps has received more than 7,288,824 page views. Her biography is available in 23 different languages on Wikipedia making her the 6,915th most popular actor.

Among actors, Busy Philipps ranks 6,867 out of 8,832. Before her are Emily Wickersham, Mylène Jampanoï, Austin Stowell, Katie Barberi, Jane Levy, and Danielle Campbell. After her are Linnea Quigley, Mandakini, Ed Speleers, Spencer Treat Clark, Amy Carlson, and Will Forte.