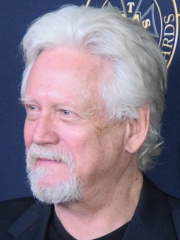 Bruce Allen Davison (born June 28, 1946) is an American actor and director. Davison is well known for his starring role as Willard Stiles in the cult horror film Willard (1971) and his Academy Award-nominated and Golden Globe-winning performance in Longtime Companion (1989), and as Thomas Semmes in the HBO original movie Vendetta. Read more on Wikipedia

Among actors, Bruce Davison ranks 2,421 out of 10,030. Before him are Peter Strauss, Rob Lowe, Lesley-Anne Down, Hayden Christensen, Sarah Rafferty, and David Doyle. After him are Shirley Jones, Norman Wisdom, Marie Dressler, Natalia Makarova, Larry Semon, and David Tennant.