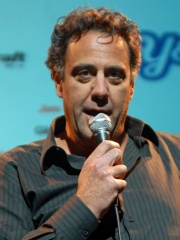 Bradley Henry Gerstenfeld (born April 14, 1960), known professionally as Brad Garrett, is an American actor and stand-up comedian. Possessing a distinctive deep voice, he has appeared in numerous television and film roles in both live-action and animation mediums. Garrett was initially successful as a stand-up comedian in the early 1980s. Read more on Wikipedia

Among actors, Brad Garrett ranks 5,456 out of 10,030. Before him are Marion Leonard, Helge Schneider, Edie Adams, Jim Backus, James Sikking, and Will Poulter. After him are Abigail Spencer, Arjun Kapoor, Robert Sheehan, Allan Arbus, Anaid Iplicjian, and Zach Roerig.