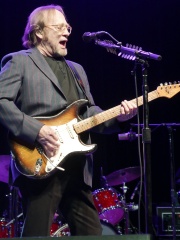 Stephen Arthur Stills (born January 3, 1945) is an American singer, songwriter, and multi-instrumentalist best known for his work with Buffalo Springfield and Crosby, Stills, Nash & Young. As both a solo act and member of two successful bands, Stills has combined record sales of over 35 million albums. He was ranked number 28 in Rolling Stone's 2003 list of "The 100 Greatest Guitarists of All Time" and number 47 in the 2011 list. Read more on Wikipedia

Since 2007, the English Wikipedia page of Stephen Stills has received more than 2,719,240 page views. His biography is available in 24 different languages on Wikipedia making him the 640th most popular singer.

Among singers, Stephen Stills ranks 643 out of 3,001. Before him are Peret, Doro, Nile Rodgers, Plastic Bertrand, Merle Haggard, and Peggy March. After him are Patsy Cline, Patachou, Afric Simone, Júlia Várady, Mariya Takeuchi, and Alanis Morissette.