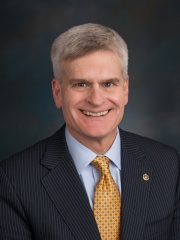 William Morgan Cassidy (born September 28, 1957) is an American physician and politician serving as the senior United States Senator from Louisiana, a seat he has held since 2015. A member of the Republican Party, he served in the Louisiana State Senate from 2006 to 2009 and in the U.S. House of Representatives from 2009 to 2015. Born in Highland Park, Illinois, Cassidy is a graduate of Louisiana State University (LSU) and LSU School of Medicine. Read more on Wikipedia