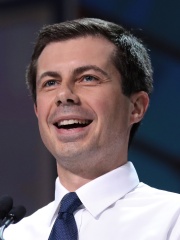 Peter Paul Montgomery Buttigieg ( BOOT-ə-jej; born January 19, 1982) is an American politician who served as mayor of South Bend, Indiana, from 2012 to 2020. He is a candidate for the Democratic nomination in the 2020 United States presidential election. Buttigieg is a graduate of Harvard College and Oxford University, attending the latter on a Rhodes Scholarship. Read more on Wikipedia

Since 2007, the English Wikipedia page of Pete Buttigieg has received more than 8,598,885 page views. His biography is available in 34 different languages on Wikipedia making him the 13,725th most popular politician.