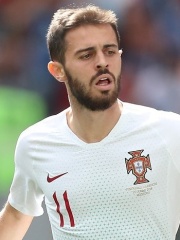 Bernardo Mota Veiga de Carvalho e Silva (born 10 August 1994), known as Bernardo Silva (Portuguese pronunciation: [bɨɾˈnaɾdu ˈsiɫvɐ]) or simply Bernardo, is a Portuguese professional footballer who plays as a midfielder for English Premier League club Manchester City and the Portugal national team. Born in Lisbon, Silva came through Benfica's youth academy. He began playing for Benfica B in 2013 and was promoted to the first-team in 2014, playing a few minutes with the latter. Read more on Wikipedia

Since 2007, the English Wikipedia page of Bernardo Silva has received more than 2,733,680 page views. His biography is available in 43 different languages on Wikipedia making him the 2,368th most popular soccer player.