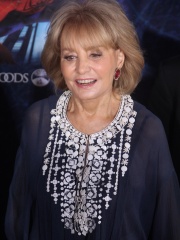 Barbara Jill Walters (born September 25, 1929) is an American broadcast journalist, author, and television personality. Respected for her interviewing ability and popularity with viewers, Walters appeared as the host of numerous television programs, including Today, The View, 20/20, and the ABC Evening News. Since retiring as a full-time host and contributor, she continued to occasionally report for ABC News through 2015.Walters began her career on The Today Show in the early 1960s as a writer and segment producer of women's interest stories. Read more on Wikipedia

Since 2007, the English Wikipedia page of Barbara Walters has received more than 3,818,472 page views. Her biography is available in 33 different languages on Wikipedia making her the 32nd most popular presenter.