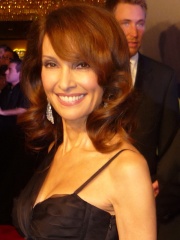 Susan Victoria Lucci (born December 23, 1946) is an American actress, television host, author and entrepreneur, best known for portraying Erica Kane on the ABC daytime drama All My Children during that show's entire network run from 1970 to 2011. The character is considered an icon, and Lucci was called "Daytime's Leading Lady" by TV Guide, with The New York Times and the Los Angeles Times citing her as the highest-paid actor in daytime television. As early as 1991, her salary had been reported as over $1 million a year. Read more on Wikipedia

Among actors, Susan Lucci ranks 4,767 out of 10,030. Before her are Beulah Bondi, Sivaji Ganesan, Ruth Roman, May Robson, Charles Walters, and Eva LaRue. After her are Leslie Uggams, Dylan Walsh, Will Geer, Jeanne Cooper, Nicholas Gonzalez, and Greta Nissen.