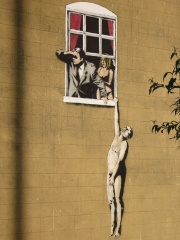 Banksy is a pseudonymous England-based street artist, political activist and film director whose real name and identity remain unconfirmed and the subject of speculation. Active since the 1990s, his satirical street art and subversive epigrams combine dark humour with graffiti executed in a distinctive stenciling technique. His works of political and social commentary have appeared on streets, walls and bridges throughout the world. Read more on Wikipedia

Since 2007, the English Wikipedia page of Banksy has received more than 13,598,798 page views. His biography is available in 55 different languages on Wikipedia (up from 53 in 2019). Banksy is the 21st most popular artist, the 498th most popular biography from United Kingdom (up from 519th in 2019) and the most popular British Artist.

Banksy is most famous for his graffiti art that often has a political message.

Page views of Banksies by language

Among ARTISTS In United Kingdom