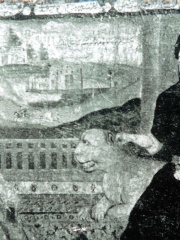 Bahāʾ al‐Dīn Muḥammad ibn Ḥusayn al‐ʿĀmilī (also known as Sheikh Baha'i, Persian: شیخ بهایی‎) (18 February 1547 – 1 September 1621) was an Arab Iranian Shia Islamic scholar, philosopher, architect, mathematician, astronomer and poet who lived in the late 16th and early 17th centuries in Safavid Iran. He was born in Baalbek, Ottoman Syria (present-day Lebanon) but immigrated in his childhood to Safavid Iran with the rest of his family. He was one of the earliest astronomers in the Islamic world to suggest the possibility of the Earth's movement prior to the spread of the Copernican theory. Read more on Wikipedia

Among philosophers, Bahāʾ al-dīn al-ʿĀmilī ranks 664 out of 1,089. Before him are Musaeus of Athens, Julien Benda, Florian Znaniecki, Jean Hyppolite, Giles of Rome, and Gilbert de la Porrée. After him are Olaf Stapledon, Friedrich Pollock, Aristo of Chios, Philo of Larissa, Abu'l-Barakāt al-Baghdādī, and Nausiphanes.