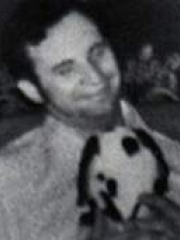 Dean Arnold Corll (December 24, 1939 – August 8, 1973) was an American serial killer who abducted, raped, tortured, and murdered at least 28 teenage boys and young men between 1970 and 1973 in Houston, Texas. He was aided by two teenaged accomplices, David Owen Brooks and Elmer Wayne Henley. The crimes, which became known as the Houston Mass Murders, came to light after Henley fatally shot Corll. Upon discovery, it was considered the worst example of serial murder in U.S. Read more on Wikipedia

Since 2007, the English Wikipedia page of Dean Corll has received more than 3,642,169 page views. His biography is available in 17 different languages on Wikipedia making him the 134th most popular extremist.