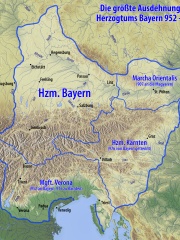 Arnulf (birth unknown; died 14 July 937), also known as the Bad (German: der Schlimme) or the Evil (der Böse), a member of the Luitpolding dynasty, held the title of Duke of Bavaria from about 907 until his death in 937. Read more on Wikipedia

Since 2007, the English Wikipedia page of Arnulf, Duke of Bavaria has received more than 59,578 page views. His biography is available in 24 different languages on Wikipedia making him the 3,866th most popular politician.

Page views of Arnulf, Duke of Bavarias by language

Among politicians, Arnulf, Duke of Bavaria ranks 3,843 out of 14,801. Before him are Ludovico Manin, Nicomedes IV of Bithynia, Inge I of Norway, Louise Marie Thérèse of Artois, Vukašin of Serbia, and Ḫattušili I. After him are Ana Pauker, Teispes, Eraric, Maria Luisa, Duchess of Lucca, Ivan Vladislav of Bulgaria, and Princess Maria Josepha of Saxony.