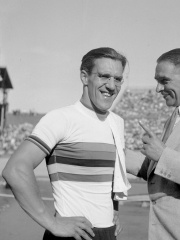 Arie Gerrit van Vliet (18 March 1916 – 9 July 2001) was a Dutch sprint cyclist. Between 1934 and 1957, he won 13 medals at world championships, including four gold medals, and set several world records in sprint events, despite the interruption by World War II. He also won a gold medal in 1000 m time trial and a silver medal in the individual sprint at the 1936 Summer Olympics in Berlin. Read more on Wikipedia

Since 2007, the English Wikipedia page of Arie van Vliet has received more than 16,473 page views. His biography is available in 15 different languages on Wikipedia making him the 268th most popular athlete.