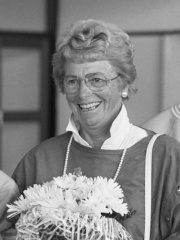 Francina "Fanny" Elsje Blankers-Koen (26 April 1918 – 25 January 2004) was a Dutch track and field athlete, best known for winning four gold medals at the 1948 Summer Olympics in London. She competed there as a 30-year-old mother of two, earning her the nickname "the flying housewife", and was the most successful athlete at the event. Having started competing in athletics in 1935, she took part in the 1936 Summer Olympics a year later. Read more on Wikipedia

Fanny Blankers-Koen is most famous for being the only woman to win four gold medals in a single Olympic Games. She won the 100 meters, 200 meters, 80 meters hurdles, and 4x100 meter relay in the 1948 Olympics.

Among athletes, Fanny Blankers-Koen ranks 19 out of 3,055. Before her are Thomas Burke, Ray Ewry, Stanisława Walasiewicz, Robert Shavlakadze, Felix Baumgartner, and Usain Bolt. After her are Hannes Kolehmainen, Iolanda Balaș, Coroebus of Elis, Bobby Morrow, Wilma Rudolph, and Sohn Kee-chung.

Among ATHLETES In Netherlands