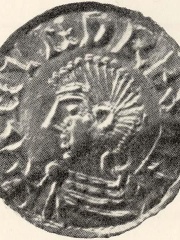 Anund Jacob or James, Swedish: Anund Jakob was King of Sweden from 1022 until around 1050. He is believed to have been born on July 25, in either 1008 or 1010 as Jakob, the son of King Olof Skötkonung and Queen Estrid. Being the second Christian king of the Swedish realm, his long and partly turbulent reign saw the increasing dissemination of Christianity. Read more on Wikipedia

Anund Jacob is most famous for being the first Swedish king to convert to Christianity.

Among politicians, Anund Jacob ranks 2,151 out of 15,710. Before him are Ernest Augustus, Elector of Brunswick-Lüneburg, Ram Nath Kovind, Hedwig of Silesia, Jotham of Judah, Luís I of Portugal, and Abdul Karim. After him are Pedro V of Portugal, Alexander Helios, Emperor Suzong of Tang, Albert III, Duke of Austria, James Francis Edward Stuart, and Abgar V.