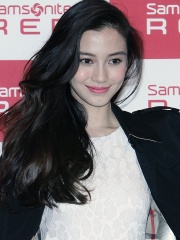 Angela Yeung Wing (Chinese: 杨颖; pinyin: Yáng Yǐng; born 28 February 1989), better known by her stage name Angelababy, is a Hong Kong model, actress and singer. In 2013, she was chosen by Southern Metropolis Daily as one of the New Four Dan Actresses. In 2016, she won the Hundred Flowers Award for Best Supporting Actress for her role in the blockbuster film Mojin: The Lost Legend. Read more on Wikipedia

Page views of Angelababies by language

Among actors, Angelababy ranks 6,788 out of 9,996. Before her are Rebecca Schaeffer, George Blagden, Matthew McGrory, Antonio de la Torre, Sophie Turner, and Miles Mander. After her are Olivia d'Abo, Imogene Coca, Clayton Moore, Lucas Till, Lionel Jeffries, and Rena Sofer.