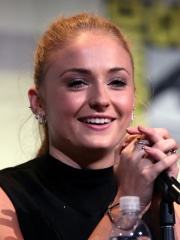 Sophie Belinda Jonas (née Turner; born 21 February 1996) is an English actress. She is known for portraying Sansa Stark on the HBO fantasy television series Game of Thrones (2011–2019), which earned her a Primetime Emmy Award nomination for the Outstanding Supporting Actress in a Drama Series in 2019. Turner appeared in the television film The Thirteenth Tale (2013) and made her feature film debut in Another Me (2013). Read more on Wikipedia

Since 2007, the English Wikipedia page of Sophie Turner has received more than 18,310,897 page views. Her biography is available in 61 different languages on Wikipedia making her the 4,317th most popular actor.