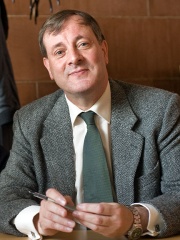 Alister Edgar McGrath (born 1953) is a Northern Irish theologian, priest, intellectual historian, scientist, Christian apologist, and public intellectual. He currently holds the Andreas Idreos Professorship in Science and Religion in the Faculty of Theology and Religion, and is a fellow of Harris Manchester College at the University of Oxford, and is Professor of Divinity at Gresham College. He was previously Professor of Theology, Ministry, and Education at King's College London and Head of the Centre for Theology, Religion and Culture, Professor of Historical Theology at the University of Oxford, and was principal of Wycliffe Hall, Oxford, until 2005. Read more on Wikipedia