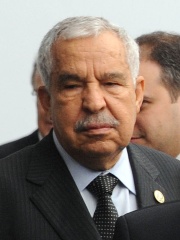 Ali Abdussalam Treki (Arabic: علي عبد السلام التريكي‎; 10 October 1937 – 19 October 2015) was a Libyan diplomat in Muammar Gaddafi's regime. Treki served as one of Libya's top diplomats beginning in the 1970s and ending with the 2011 Libyan Civil War. He was Minister of Foreign Affairs from 1976 to 1982 and again from 1984 to 1986, and he was later the Permanent Representative to the United Nations on several occasions. Read more on Wikipedia

Since 2007, the English Wikipedia page of Ali Treki has received more than 45,647 page views. His biography is available in 15 different languages on Wikipedia. Ali Treki is the 12,630th most popular politician, the 45th most popular biography from Libya and the 21st most popular Libyan Politician.

Among politicians, Ali Treki ranks 12,630 out of 15,710. Before him are Klaus Töpfer, Mugur Isărescu, Coenred of Mercia, Federico Tinoco Granados, Aldfrith of Northumbria, and Ignazio Cassis. After him are Vlastimil Tusar, Jyoti Basu, Günther Oettinger, Włodzimierz Cimoszewicz, Mogens Lykketoft, and Edwin Stanton.