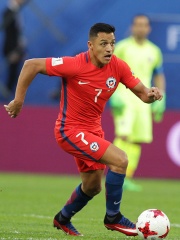 Alexis Alejandro Sánchez Sánchez (Spanish pronunciation: [aˈleksis ˈsantʃes]; born 19 December 1988), also known mononymously as Alexis, is a Chilean professional footballer who plays as a forward for Serie A club Inter Milan and the Chile national team. He is considered by many to be among the best players of his generation and often lauded as the greatest Chilean player of all time.Dubbed "El Niño Maravilla" (The Wonder Child), Sánchez began his senior club career playing for Cobreloa, and signed with Udinese in 2006, aged 18; he won consecutive league titles while on loan to Colo-Colo and River Plate. Sánchez was the subject of a record association football transfer when he signed for Barcelona in 2011 in a transfer worth €37.5 million, becoming the most expensive Chilean player of all time. Read more on Wikipedia