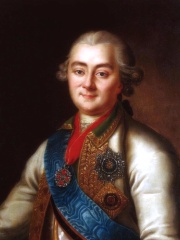 Count Alexei Grigoryevich Orlov (Russian: Алексей Григорьевич Орлов; 5 October [O.S. 24 September] 1737 – 5 January [O.S. 24 December 1807] 1808) was a Russian soldier and statesman, who rose to prominence during the reign of Catherine the Great. Orlov served in the Imperial Russian Army, and through his connections with his brother, became one of the key conspirators in the plot to overthrow Tsar Peter III and replace him on the Russian throne with his wife, Catherine. The plot, carried out in 1762, was successful, and Peter was imprisoned under Alexei Orlov's guard. Read more on Wikipedia

Since 2007, the English Wikipedia page of Alexei Grigoryevich Orlov has received more than 172,193 page views. His biography is available in 25 different languages on Wikipedia making him the 542nd most popular military personnel.