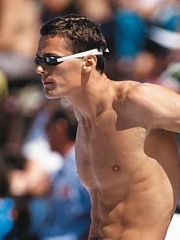 Aleksandr Vladimirovich Popov (Russian: Алекса́ндр Влади́мирович Попо́в, born 16 November 1971), better known as Alexander Popov, is a former Russian swimmer. Widely considered the greatest sprint swimmer in history, Popov won gold in the 50-metre and 100 m freestyle at the 1992 Olympics and repeated the feat at the 1996 Olympics, and is the only male in Olympic games history to defend both titles. He held the world record in the 50 m for eight years, and the 100 m for six. Read more on Wikipedia

Since 2007, the English Wikipedia page of Alexander Popov has received more than 25,930 page views. His biography is available in 32 different languages on Wikipedia making him the 19th most popular swimmer.

Among SWIMMERS In Russia