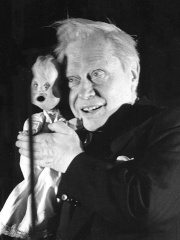 Sergey Vladimirovich Obraztsov (Russian: Серге́й Влади́мирович Образцо́в, 5 July (O.S. 22 June), 1901 – 8 May 1992) was a Soviet and Russian puppeteer who is credited by the Encyclopædia Britannica with "establishing puppetry as an art form in the Soviet Union." Puppet theaters in many countries owe their establishment to Obraztsov's influence. His collection of exotic puppets was the largest in Russia and one of the largest in the world.Obraztsov was born on 22 June 1901 in Moscow into the family of a schoolteacher and a railroad engineer. Between 1922 and 1931, he worked as an actor with Vladimir Nemirovich-Danchenko in one of the studios of the Moscow Art Theatre. Read more on Wikipedia

Since 2007, the English Wikipedia page of Sergey Obraztsov has received more than 16,056 page views. His biography is available in 20 different languages on Wikipedia making him the 704th most popular film director.