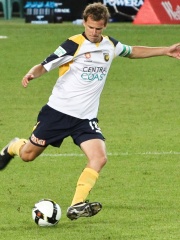 Alexander William Wilkinson (born 13 August 1984) is an Australian international football (soccer) player who plays as a central defender and is the captain for Sydney FC in the A-League. Wilkinson was born in Sydney and made his senior debut for Northern Spirit in 2002. After moving to Ryde City Gunners and Manly United in 2004, Wilkinson joined A-League club Central Coast Mariners, where he eventually became club captain and made over 200 appearances. Read more on Wikipedia

Among soccer players, Alex Wilkinson ranks 12,155 out of 16,923. Before him are Rogério Corrêa, Manabu Nakamura, Nedum Onuoha, Javier Ontiveros, Shuichi Mase, and Naoki Urata. After him are Per Karlsson, Marvin Ducksch, Richard Garcia, Walid Atta, Moritz Volz, and Matt Miazga.