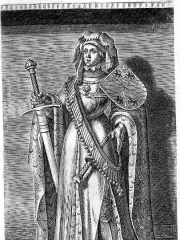 Duke Albert II or Albrecht (1368 – January 21, 1397, Kelheim) was a feudal co-regent, with his father Albert I, Duke of Bavaria, in the counties of Holland, Hainaut, and Zeeland in the Low Countries. Additionally, from 1389 until his death in 1397, he administered the Bavarian province of Straubing in the name of his father, it being his Bavarian ducal line's appanage and seat. Read more on Wikipedia

Since 2007, the English Wikipedia page of Albert II, Duke of Bavaria has received more than 6,745 page views. His biography is available in 16 different languages on Wikipedia making him the 8,802nd most popular politician.

Page views of Albert II, Duke of Bavarias by language

Among politicians, Albert II, Duke of Bavaria ranks 8,756 out of 14,801. Before him are Ashur-dan I, Jay Rockefeller, Francesc Cambó, Anne Lister, Histiaeus, and Ashur-bel-kala. After him are Adib Shishakli, Mahendra of Nepal, Princess Augusta Sophia of the United Kingdom, Dámaso Berenguer, Jakaya Kikwete, and Taur Matan Ruak.