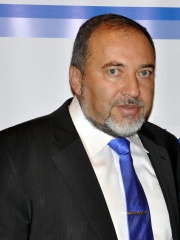 Avigdor Lieberman (Hebrew: אֲבִיגְדוֹר לִיבֶּרְמָן, IPA: [aviɡˈdor ˈliberman], (audio) , Russian: Эве́т Льво́вич Ли́берман, [ɪˈvɛt lʲˈvovɪt͡ɕ ˈlʲɪbʲɪrmɐn], 5 July 1958) is a Soviet-born Israeli politician who served as the Defense Minister of Israel from 2016 to 2018; on 14 November 2018, he resigned because of a ceasefire in Gaza which he characterized as "surrendering to terror." He served as Israel's Minister of Foreign Affairs from 2009 to 2012, and again from 2013 to 2015. He has also served as member of the Knesset and as Deputy Prime Minister of Israel. He is the founder and leader of the secular nationalist Yisrael Beiteinu (Israel Our Home) party, whose electoral base has initially consisted overwhelmingly of Russian-speaking immigrants from the former Soviet Union, but later attracted broader support. Read more on Wikipedia

Since 2007, the English Wikipedia page of Avigdor Lieberman has received more than 558,380 page views. His biography is available in 41 different languages on Wikipedia making him the 5,312th most popular politician.

Among politicians, Avigdor Lieberman ranks 5,279 out of 14,801. Before him are Infante Carlos, Count of Montemolin, Christian Michelsen, Étienne Marcel, Penda of Mercia, Lollia Paulina, and Hans Martin Sutermeister. After him are Orodes III of Parthia, William V, Duke of Aquitaine, Sitamun, Sobekhotep III, Borrell II, Count of Barcelona, and Mike Pompeo.

Among POLITICIANS In Moldova