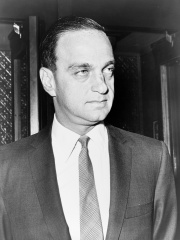 Roy Marcus Cohn (; February 20, 1927 – August 2, 1986) was an American lawyer best known for being Senator Joseph McCarthy's chief counsel during the Army–McCarthy hearings in 1954, for assisting with McCarthy's investigations of suspected communists, and as a top political fixer.Born in New York City and educated at Columbia University, Cohn rose to prominence as a U.S. Department of Justice prosecutor at the espionage trial of Julius and Ethel Rosenberg, which concluded with the Rosenbergs' executions in 1953. As McCarthy's chief counsel, Cohn came to be closely associated with McCarthyism and its downfall. Read more on Wikipedia

Since 2007, the English Wikipedia page of Roy Cohn has received more than 4,513,445 page views. Her biography is available in 16 different languages on Wikipedia making her the 33rd most popular lawyer.