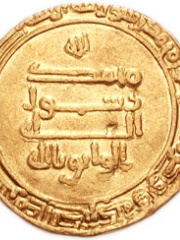 Abū Jaʿfar Hārūn ibn Muḥammad (Arabic: أبو جعفر هارون بن محمد المعتصم; 17 April 812 – 10 August 847), better known by his regnal name al-Wāthiq bi’llāh (الواثق بالله, lit. 'He who trusts in God'), was an Abbasid caliph who reigned from 842 until 847 AD (227–232 AH in the Islamic calendar). Al-Wathiq is described in the sources as well-educated, intellectually curious, but also a poet and a drinker, who enjoyed the company of poets and musicians as well as scholars. His brief reign was one of continuity with the policies of his father, al-Mu'tasim, as power continued to rest in the hands of the same officials whom al-Mu'tasim had appointed. Read more on Wikipedia

Al-Wathiq was most famous for his military victories.

Page views of Al-Wathiqs by language

Among politicians, Al-Wathiq ranks 3,710 out of 15,577. Before him are Menander I, Johann Wilhelm, Elector Palatine, Bayinnaung, James Brooke, Agnes of France, Byzantine Empress, and Nicholas Francis, Duke of Lorraine. After him are Erhard Heiden, Labarna I, Gabriel Narutowicz, Charles, Duke of Berry, Takahito, Prince Mikasa, and Jahan Shah.