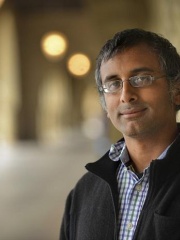 Akshay Venkatesh (born 21 November 1981) is an Australian mathematician and a professor (since 15 August 2018) at the School of Mathematics at the Institute for Advanced Study. His research interests are in the fields of counting, equidistribution problems in automorphic forms and number theory, in particular representation theory, locally symmetric spaces, ergodic theory, and algebraic topology.He is the only Australian to have won medals at both the International Physics Olympiad and International Mathematical Olympiad, which he did at the age of 12.In 2018, he was awarded the Fields Medal for his synthesis of analytic number theory, homogeneous dynamics, topology, and representation theory. He is the second Australian and the second person of Indian descent to win the Fields Medal. Read more on Wikipedia

Among mathematicians, Akshay Venkatesh ranks 824 out of 828. Before him are Steven Strogatz, Éva Tardos, Victor Glushkov, Lai-Sang Young, Pietro Boselli, and Maryna Viazovska. After him are Nikolai Durov and Daniel J. Bernstein.

Among MATHEMATICIANS In India