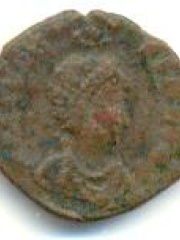 Aelia Eudoxia (; Greek: Αἰλία Εὐδοξία; died 6 October 404) was a Roman empress consort by marriage to the Roman emperor Arcadius. The marriage was the source of some controversy, as it was arranged by Eutropius, one of the eunuch court officials, who was attempting to expand his influence. As Empress, she came into conflict with John Chrysostom, the Patriarch of Constantinople, who was popular among the common folk for his denunciations of imperial and clerical excess. Read more on Wikipedia

Aelia Eudoxia was most famous for being the wife of Emperor Arcadius and mother of Emperor Theodosius II.

Among politicians, Aelia Eudoxia ranks 3,512 out of 15,577. Before her are Yolande of Aragon, Dred Scott, Sumu-abum, Ernest I, Duke of Saxe-Gotha, Prince Henry of Prussia, and Kurt Zeitzler. After her are Victor, Prince Napoléon, Wittiza, Zumbi, Violet Jessop, Andrzej Duda, and Cleopatra Thea.