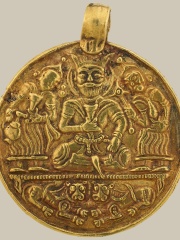 Fannā (Panāh) Khusraw (Persian: پناه خسرو‎), better known by his laqab of ʿAḍud al-Dawla (Arabic: عضد الدولة‎, "Pillar of the [Abbasid] Dynasty") (September 24, 936 – March 26, 983) was an emir of the Buyid dynasty, ruling from 949 to 983, and at his height of power ruling an empire stretching from Makran to Yemen and the shores of the Mediterranean Sea. He is widely regarded as the greatest monarch of the dynasty, and by the end of his reign was the most powerful ruler in the Middle East.The son of Rukn al-Dawla, Fanna Khusraw was given the title of Adud al-Dawla by the Abbasid caliph in 948 when he was made emir of Fars after the death of his childless uncle Imad al-Dawla, after which Rukn al-Dawla became the senior emir of the Buyids. In 974 Adud al-Dawla was sent by his father to save his cousin Izz al-Dawla from a rebellion. Read more on Wikipedia

Among politicians, 'Adud al-Dawla ranks 5,660 out of 15,710. Before him are Franz Gürtner, Pausanias of Orestis, Carola of Vasa, Archduchess Maria Leopoldine of Austria-Este, Emperor Go-Shirakawa, and Adélaïde d'Orléans. After him are Stephen II, Duke of Bavaria, Aristobulus II, Bruno Streckenbach, Emperor Go-Toba, Louis IV, Landgrave of Thuringia, and Archduchess Margarete Sophie of Austria.