This page contains a list of the greatest German Tennis Players. The pantheon dataset contains 1,148 Tennis Players, 56 of which were born in Germany. This makes Germany the birth place of the 6th most number of Tennis Players behind France and Spain. 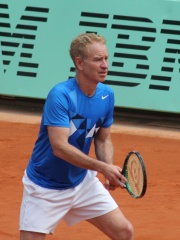 With an HPI of 72.21, John McEnroe is the most famous German Tennis Player.  His biography has been translated into 65 different languages on wikipedia.

John Patrick McEnroe Jr. (born February 16, 1959) is an American former professional tennis player. He was known for his shot-making and volleying skills, in addition to confrontational on-court behavior that frequently landed him in trouble with umpires and tennis authorities. McEnroe attained the world No. 1 ranking in both singles and doubles, finishing his career with 77 singles and 78 doubles titles; this remains the highest men's combined total of the Open Era. He won seven Grand Slam singles titles, four at the US Open and three at Wimbledon, and nine men's Grand Slam doubles titles. His singles match record of 82–3 in 1984 remains the best single season win rate of the Open Era. McEnroe also excelled at the year-end tournaments, winning eight singles and seven doubles titles, both of which are records. Three of his winning singles year-end championships were at the Masters Grand Prix (the ATP year-end event) and five were at the World Championship Tennis (WCT) Finals, an event which ended in 1989. Since 2000, there has been only one year-end men's singles event, the ATP Finals (the new name for the Masters Grand Prix). He was named the ATP Player of the Year and the ITF World Champion three times each: 1981, 1983 and 1984. McEnroe contributed to five Davis Cup titles for the U.S. and later was team captain. He has stayed active in retirement, often competing in senior events on the ATP Champions Tour. He has also worked as a television commentator during the majors. 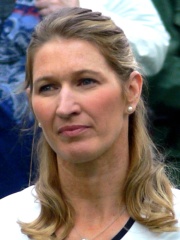 With an HPI of 69.78, Steffi Graf is the 2nd most famous German Tennis Player.  Her biography has been translated into 74 different languages.

Stefanie Maria "Steffi" Graf (German pronunciation: [ˈʃtɛfiː ˈɡʁaːf], audio ; born 14 June 1969) is a German former professional tennis player. She was ranked world No. 1 for a record 377 weeks (more than 7 years) and won 22 Grand Slam singles titles, which ranks second since the introduction of the Open Era in 1968 and third all-time behind Margaret Court (24) and Serena Williams (23). In 1988, she became the only tennis player to achieve the Golden Slam by winning all four Grand Slam singles titles and the Olympic gold medal in the same calendar year. Furthermore, she is the only tennis player to have won each Grand Slam tournament at least four times. Graf was ranked world No. 1 by the Women's Tennis Association (WTA) for a record 377 total weeks—the longest period for which any player, male or female, has held the number-one ranking since the WTA and the Association of Tennis Professionals began issuing rankings. She won 107 singles titles, which ranks her third on the WTA's all-time list after Martina Navratilova (167 titles) and Chris Evert (157 titles). She and Margaret Court are the only players, male or female, to win three Grand Slam tournaments in a calendar year five times (1988, 1989, 1993, 1995 and 1996). Notable features of Graf's game were her versatility across all playing surfaces, footwork and powerful forehand drive. Graf's athletic ability and aggressive game played from the baseline have been credited with developing the modern style of play that has come to dominate today's game. She won six French Open singles titles (second to Evert), seven Wimbledon singles titles, four Australian Open titles, and five U.S. Open singles titles. She is the only singles player (male or female) to have achieved a Grand Slam since hard court was introduced as a surface at the US Open in 1987. Consequently, Graf's Grand Slam was achieved on grass, clay, and hard court while the previous five Grand Slams were decided on only grass and clay. Graf reached thirteen consecutive major singles finals, from the 1987 French Open through to the 1990 French Open, winning nine of them. She won 5 consecutive major singles tournaments (1988 Australian Open to 1989 Australian Open), and seven out of eight, in two calendar years (1988 Australian Open to 1989 US Open, except 1989 French Open). She reached a total of 31 major singles finals. Graf retired at the age of 30 in 1999 while she was ranked world No. 3. She is regarded as one of the greatest female tennis players of all time. Navratilova included Graf on the top of her list of the greatest players ever. The year of her retirement, Billie Jean King said, "Steffi is definitely the greatest women's tennis player of all time." In December 1999, Graf was named the greatest female tennis player of the 20th century by a panel of experts assembled by the Associated Press. She married former world No. 1 men's tennis player Andre Agassi in October 2001. They have two children. Graf was inducted into the Tennis Hall of Fame in 2004. Along with countryman Boris Becker, Graf was considered instrumental in popularizing tennis in Germany, where it has remained a highly popular sport ever since. 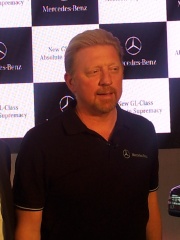 With an HPI of 69.08, Boris Becker is the 3rd most famous German Tennis Player.  His biography has been translated into 66 different languages.

Boris Franz Becker (German pronunciation: [ˈboːʁɪs ˈbɛkɐ], audio ; born 22 November 1967) is a German former world No. 1 professional tennis player. He was successful from the start of his career, winning the first of his six major singles titles at age 17. His Grand Slam singles titles included three Wimbledons, two Australian Opens and one US Open. He also won three year-end championships, 13 Masters Series titles and an Olympic gold medal in doubles. In 1989, he was voted the Player of the Year by both the ATP and the ITF. He is the first male player to appear in 7 Wimbledon finals, tied with Sampras (7) behind Federer (12). At times Becker struggled with his early success and fame, and his personal life has been turbulent. Since his playing career ended, he has engaged in numerous ventures, including coaching Novak Djokovic for three years, and working in the field of poker. 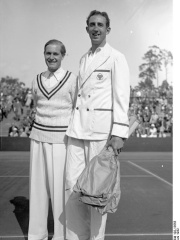 With an HPI of 64.78, Gottfried von Cramm is the 4th most famous German Tennis Player.  His biography has been translated into 20 different languages.

Gottfried Alexander Maximilian Walter Kurt Freiherr von Cramm (English: Baron Gottfried von Cramm, German pronunciation: [ˈɡɔtˌfʀiːt fɔn ˈkʁam]; 7 July 1909 – 8 November 1976), was a German amateur tennis champion who won the French Open twice. He was ranked number 2 in the world in 1934 and 1936, and number 1 in the world in 1937. He was inducted into the International Tennis Hall of Fame in 1977, an organisation which considers that he is "most remembered for a gallant effort in defeat against Don Budge in the 1937 Interzone Final at Wimbledon".The Nazi regime attempted to exploit his appearance and skill as a symbol of Aryan supremacy, but he refused to identify with Nazism. He was persecuted as a homosexual by the German government and was jailed briefly in 1938. Cramm figured briefly in the gossip columns as the sixth husband of Barbara Hutton, the Woolworth heiress. 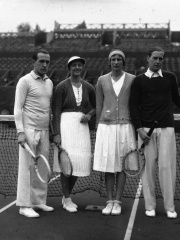 With an HPI of 60.58, Hilde Krahwinkel Sperling is the 5th most famous German Tennis Player.  Her biography has been translated into 20 different languages.

Hildegard "Hilde" Krahwinkel Sperling (German pronunciation: [ˈhɪldəɡaʁt kʀaːvɪŋkl̩] née Krahwinkel; 26 March 1908 – 7 March 1981) was a German tennis player who became a dual-citizen after marrying Dane Svend Sperling in December 1933. She won three consecutive singles titles at the French Championships from 1935 to 1937. Krahwinkel Sperling is generally regarded as the second-greatest female German tennis player in history, behind Steffi Graf. Sperling played a counterpunching game, predicated on speed, and wore down opponents. Helen Jacobs once wrote that Sperling was the third-best player she ever played, behind Helen Wills Moody and Suzanne Lenglen. 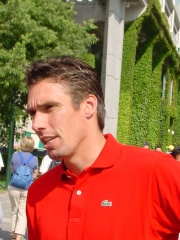 With an HPI of 59.91, Michael Stich is the 6th most famous German Tennis Player.  His biography has been translated into 37 different languages.

Michael Detlef Stich (German pronunciation: [ˈmɪçaːʔeːl ʃtɪç], audio ; born 18 October 1968) is a former professional tennis player from Germany. He won the men's singles title at Wimbledon in 1991, the men's doubles titles at both Wimbledon and the Olympic Games in 1992, and was a singles runner-up at the 1994 US Open and the 1996 French Open. Stich won 18 singles titles and ten doubles titles. His career-high singles ranking was world No. 2 in 1993. 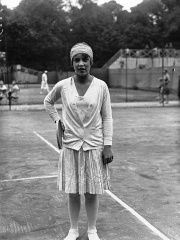 With an HPI of 58.91, Cilly Aussem is the 7th most famous German Tennis Player.  Her biography has been translated into 20 different languages.

Cilly Aussem (German pronunciation: [ˈʦiːli̯ə ˈaʊ̯sm]; 4 January 1909 – 22 March 1963) was a German female tennis player. She was the first German, male or female, to win the singles title at Wimbledon, which she did in 1931. She also won the women's single titles at the French Championships and German Championships in 1931. Aussem's coach and mixed doubles partner was Bill Tilden. They won the mixed doubles title at the 1930 French Championships. According to A. Wallis Myers of The Daily Telegraph and the Daily Mail, Aussem was ranked in the world top ten in 1928, 1930, 1931, and 1934, reaching a career high of World No. 2 in those rankings in 1930 and 1931 behind Helen Wills Moody. 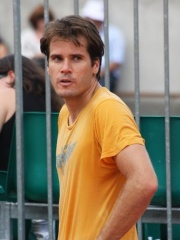 With an HPI of 57.02, Tommy Haas is the 8th most famous German Tennis Player.  His biography has been translated into 39 different languages.

Thomas Mario Haas (German pronunciation: [ˈtɔmi ˈhaːs]; born 3 April 1978) is a German former professional tennis player. He competed on the ATP Tour from 1996 to 2017. After breaking into the world top 100 in 1997, and reaching a career-high singles ranking of world No. 2 in May 2002, his career was interrupted by injuries: Haas twice dropped out of the world rankings due to being unable to play for twelve months. His first period of injury saw him miss the whole of the 2003 season, and he did not return to the world's top 10 until 2007. He also missed over a year's tennis between February 2010 and June 2011, but afterwards returned to play on the tour. He returned to world No. 11 in 2013, after reaching the quarterfinals at the French Open for the first time in his career. Haas reached the semifinals of the Australian Open three times, and in Wimbledon once. He reached the quarterfinal stage of each of the Grand Slam events. He won 15 career titles in singles, including one Masters tournament (Stuttgart) in 2001, and has a silver medal from the 2000 Summer Olympics. 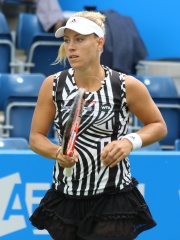 With an HPI of 56.87, Angelique Kerber is the 9th most famous German Tennis Player.  Her biography has been translated into 60 different languages.

Angelique Kerber (German: [ʔandʒɛˈliːk ˈkɛɐ̯bɐ]; born 18 January 1988) is a German professional tennis player. A former world No. 1 and winner of three Grand Slam tournaments, she made her professional debut in 2003 and rose to prominence upon reaching the semifinals of the 2011 US Open as the No. 92-ranked player in the world. She ascended to the top of the rankings on 12 September 2016, thus becoming the 22nd and oldest player to achieve the number-one ranking for the first time.A continually high-ranking left-handed female tennis player, Kerber has won 12 career singles titles across all surfaces on the WTA Tour, including multiple Grand Slam titles: the 2016 Australian Open, the 2016 US Open and the 2018 Wimbledon Championships. She has also won an Olympic silver medal while representing Germany at the 2016 Rio Olympics. Kerber is currently ranked world No. 26 as of February 22, 2021. 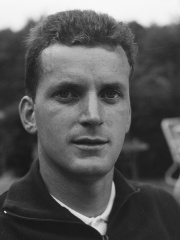 With an HPI of 56.22, Wilhelm Bungert is the 10th most famous German Tennis Player.  His biography has been translated into 15 different languages.